The Reserve Bank of Australia (RBA) will complete its latest meeting at 03:30 GMT Tuesday. It will be quite explosive as there is a massive discrepancy between the central bank’s own guidance and market pricing for rate increases. The RBA insists it won’t raise rates until 2024 but money markets expect four rate increases next year alone. It seems investors have gone too far, which leaves the aussie vulnerable to a correction.

The RBA has a difficult balancing act to execute. Even though the Bank has stressed it doesn’t expect to lift the cash rate until 2024, investors are defying that guidance, pricing in the first rate hike in the second quarter of 2022. The bet is that the RBA will have to blink and abandon this commitment in the face of persistent inflation.

It probably will. The central bank did not defend its yield curve control target this week, allowing short-dated yields to spike much higher. This is a clear signal it intends to abandon yield curve control soon and possibly open the door for earlier rate increases. 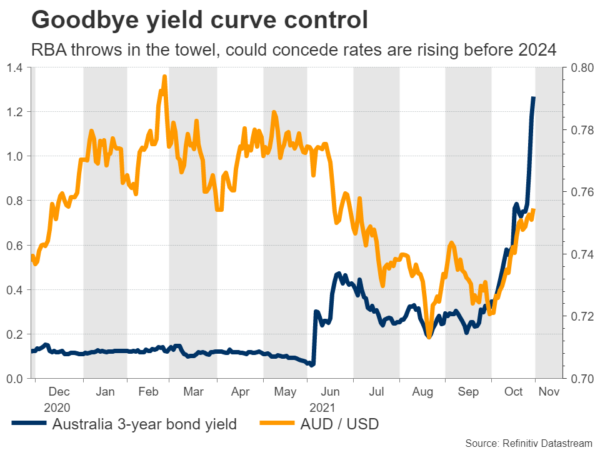 Even though most of the country has just exited a strict lockdown, the economy doesn’t seem to have suffered too much. The labor market escaped without any massive injuries, PMI business surveys have already rebounded, and core inflation fired up in Q3.

Hence, the economy has been resilient, but markets have also gone too far in pricing in such aggressive rate increases. While inflation is likely to accelerate further as the economy reopens properly, most of that boils down to supply disruptions and energy costs. It’s not the demand-driven inflation the central bank wants to see before hitting the brakes.

Bearing everything in mind, the RBA will likely tone down market expectations. Even though it could abandon yield curve control and signal that rates may be raised before 2024, raising them four times next year as the markets currently suggest is also a bridge too far.

Policymakers could simply indicate they don’t expect to raise rates anytime soon or that market pricing is completely unrealistic. This message would be even more powerful if the updated economic forecasts reaffirm that any spike in inflation will be transitory. Those are published three days later on Friday. 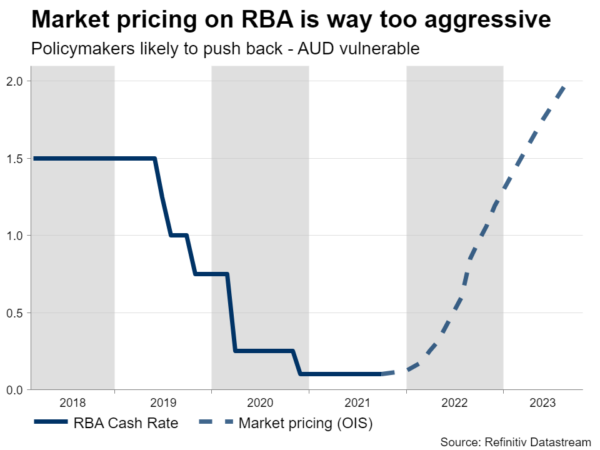 For the RBA, inflation will remain transitory as long as the outlook for wages is subdued. If wages don’t fire up, consumers won’t have the pockets to sustain inflation. There’s also the risk of a slowdown in China, something that could inflict collateral damage on the Australian economy that relies on China to absorb its commodity exports.

It’s a tricky one for the aussie. On the one hand, the RBA will have to break its word and concede that rates are unlikely to stay at current levels until 2024. That is almost certain after it decided not to defend its yield target.

Yet the central bank also needs to nudge the market back into obedience somehow. Allowing yields to stay so elevated could hold back the recovery and exacerbate debt burdens for consumers.

As such, the risks surrounding the Australian dollar from this meeting seem tilted to the downside. If the RBA clarifies its position correctly, Australian yields are likely to retreat, even if the yield target is officially abandoned.

Taking a technical look at aussie/dollar, a retreat could encounter initial support near the 0.7460 zone.

On the upside, if the RBA doesn’t manage to convince markets, the pair could shoot higher for a test of the 0.7600 region.

Letter updates Sign up to myFT Daily Digest to be the first to know about Letter news. Regarding your story