Sign up to myFT Daily Digest to be the first to know about Climate change news.

Europe’s summer floods and wildfires are just the latest sign that the costs of transitioning to a low-carbon economy are far less than the “particularly challenging” impact of climate change on the region’s companies, banks and economy, according to the European Central Bank.

The ECB reached its conclusion after calculating the potential impact of climate change on 4m companies and 1,600 banks in Europe over the next 30 years, for which it published results on Wednesday.

Its findings come as surging European energy prices intensify a political backlash against Brussels’ plans to extend carbon taxes, a central policy of the EU’s drive to hit net zero emissions by 2050.

But the ECB said its worst-case scenario — in which no action is taken to stop global warming — could knock 10 per cent off European gross domestic product and cause a 30 per cent rise in defaults on corporate loans to the most exposed companies.

The Frankfurt-based institution sounded particularly alarmed about the potential for physical risks to companies, particularly from wildfires in southern Europe, to increase “in a non-linear fashion” if no action is taken to tackle climate change.

“Without policies to transition to a greener economy, physical risks will increase over time,” said Luis de Guindos, vice-president of the ECB. “They will increase non-linearly . . . It is essential to transition early on and gradually, so that we can mitigate the cost of both the green transition and the future impact of natural disasters.”

The physical risks of a changing climate were underlined earlier this year when major floods killed 181 people in western Germany and the number of wildfires increased sharply in Turkey, Italy and Greece after Europe recorded its second-warmest July this year.

The ECB modelled three potential scenarios: an orderly transition to a greener economy, a disorderly transition caused by a delayed but sudden response to climate change, and a “hothouse” world with few green policies leading to extreme physical risks.

The biggest physical risk to companies came from wildfires, which the ECB said mostly affected southern European countries and meant that banks in those countries were more exposed to a potential rise in loan defaults.

It said the probability of default for companies with the highest physical risk under the extreme climate scenario increased 37.5 per cent by 2050.

Mining, electricity and gas companies would also be hit by “significant costs to reduce emissions” that would increase their likelihood of default “in the short to medium term in the wake of a green transition”, it said. 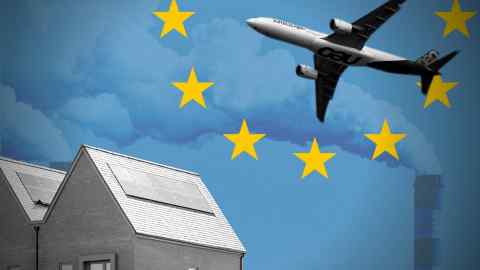 However, it said that while “some firms are hit harder by transition costs than others, all sectors ultimately benefit from making the transition”. It added: “The short-term costs of the transition pale in comparison to the costs of unfettered climate change in the medium to long term.”

The ECB said it would use the results from its latest exercise as the basis for stress tests to assess the exposure of individual eurozone banks to climate risks next year, which will feed in to their capital requirements. Officials plan a separate exercise to examine the role of insurance and whether it will mitigate or amplify climate risk.

The ECB also plans to model its own exposure to climate risks in the vast portfolio of bonds and collateral it has built up in recent years.

The ECB used scenarios developed by the Network for Greening the Financial System, a club of more than 100 central banks and regulators around the world seeking to tackle climate change. It also used data provided by Four Twenty Seven, an affiliate of Moody’s, and research house Urgentem.

Are you curious about the FT’s environmental sustainability commitments? Find out more about our science-based targets here

Beware of debt, for it starts with worry and it ends with war (Umar ibn Al Khattab) We need to

Manteca Unified, according to one of the leading analysts of financial performance, is “very strongly” positioned to meet financial commitments.

Bitcoin and cryptocurrency prices have suddenly surged after a tumultuous week for crypto traders. The bitcoin price has added around