Sign up to myFT Daily Digest to be the first to know about Covid-19 vaccines news.

A booster shot of Johnson & Johnson’s Covid-19 vaccine produced a strong and rapid antibody response against the virus, the pharmaceutical company said on Wednesday.

The preliminary data from the world’s largest healthcare company comes as top US public health officials and rival vaccine makers say a booster shot programme is needed to protect against waning immunity.

J&J said a second shot elicited a nine-fold increase in antibodies against Covid compared with levels seen 28 days after a single dose of the jab.

“Significant increases” in antibody responses were seen in people aged 18 to 55, as well as those older than 65, who were given a lower dose. 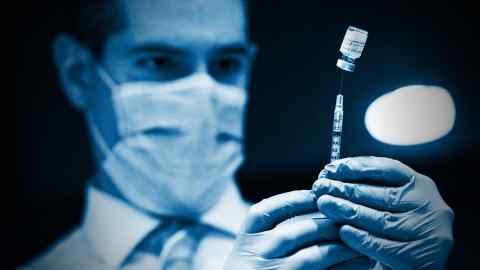 The rollout of booster shots has been hotly debated, with the World Health Organization urging rich countries to pause their programmes until at least 10 per cent of the population in all countries have been vaccinated.

The US Centers for Disease Control and Prevention has recommended that people with weakened immune systems receive a booster dose of an mRNA jab, but has held back from recommending anything for those who have received the J&J vaccine.

The agency announced last week a plan to begin offering booster shots from September 20 to all Americans who were originally vaccinated with the Moderna or BioNTech/Pfizer jabs, starting with those who were inoculated eight months ago. It said that a plan for J&J vaccine recipients would be made when more data was available.

Pfizer submitted preliminary data earlier this month for a booster to the US drugs regulator.

Studies showing that vaccine efficacy wanes over time have fuelled the debate around additional doses, especially as cases begin rising once again in some countries.

A CDC study on Tuesday showed that mRNA vaccine efficacy against infection from the highly transmissible Delta variant decreased from 91 per cent to 66 per cent. An Oxford university study published last week showed that efficacy of the BioNTech/Pfizer vaccine against symptomatic infection almost halved after four months.