Sign up to myFT Daily Digest to be the first to know about Lebanon news.

Lebanese lawyers have sued a UK-registered chemical company at the High Court in London over its alleged role in the massive explosion last year at Beirut’s port that killed more than 200 people.

The lawsuit was filed against Savaro Ltd this month by the Beirut Bar Association and four others, including a survivor of the blast and the families of two people who were killed. It alleges that the chemical company failed to properly store or dispose of hundreds of tonnes of ammonium nitrate that ignited on August 4 last year, causing one of the largest non-nuclear explosions in history.

Lawyers said the case was an attempt to hold to account those allegedly responsible for the explosion, which devastated huge areas of Beirut, killed at least 218 people, wounded thousands of others and caused about $4bn of damage to the Lebanese capital.

Families of the victims have increasingly pinned their hopes on international investigations to bring them justice, blaming Lebanon’s ruling elite for hampering a domestic probe.

This case is being brought in London because Savaro, listed as a chemical wholesaler, is registered in the UK. The lawyers are seeking damages from the company, although these will be quantified later.

The legal challenge argues that Savaro owned the 2,750 tonnes of ammonium nitrate, which was destined in 2013 for an explosives company in Mozambique. The ageing ship transporting the cargo foundered in Beirut’s port en route to southern Africa and the chemical material, which is used in explosives, was offloaded in 2014 to a port warehouse on the instructions of a Lebanese court.

Richard Slade, a lawyer at the eponymous legal firm that is representing Savaro, said the chemicals company “has never traded” and did not enter into the transactions referred to in the claim.

Slade said the company would make its defence “in due course”. A new Savaro director was appointed on Friday, Ukrainian lawyer Volodymyr Hliadchenko, who said he had “acquired the company’s corporate ownership”.

The lawsuit is being led by Camille Abousleiman, a former Lebanese labour minister, and law firm Dechert, where he now works.

Abousleiman told the Financial Times he believed Savaro was the owner of the ammonium nitrate, and as such Savaro was responsible under Lebanese law for its proper storage, disposal and any damage caused by it.

“The victims and the surviving family members of the victims believe that anybody who has direct or indirect responsibility for this blast should be brought to justice, both criminal and civil, wherever there is jurisdiction,” Abousleiman said. “I don’t think anybody should escape justice in this particular horrendous situation.” 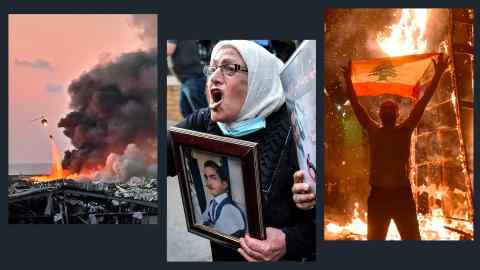 An FT investigation last year found Savaro had made inquiries about the shipment in 2015, but the FT was not able to confirm whether the company took further action after learning from a Lebanese court-issued report that more than half of the bags holding the ammonium nitrate were damaged.

Since its incorporation in 2006, Savaro has often filed accounts as a “dormant” firm.

“We are highly confident that we’re going to have evidence of who the beneficial owner is,” Abousleiman said last week, adding that he was seeking to include them in the claim. “We want to bring this person to justice either in England as part of the current action or in some other way.” He declined to comment on the newly declared owner.

The company had sought to begin liquidation proceedings in January but that process has been halted by the lawsuit.

Abousleiman said other potential defendants could be pursued.

Opponents of a ballot initiative that would codify gig-worker status for drivers for companies like Uber, Lyft and DoorDash as

ESG bond issuance closed 2020 with an issued volume of more than $450 billion, representing growth of close to 50%

ISLAMABAD: In yet another major reshuffle in its economic team, Pakistan Tehreek-i-Insaf government on Tuesday removed the chairman of the