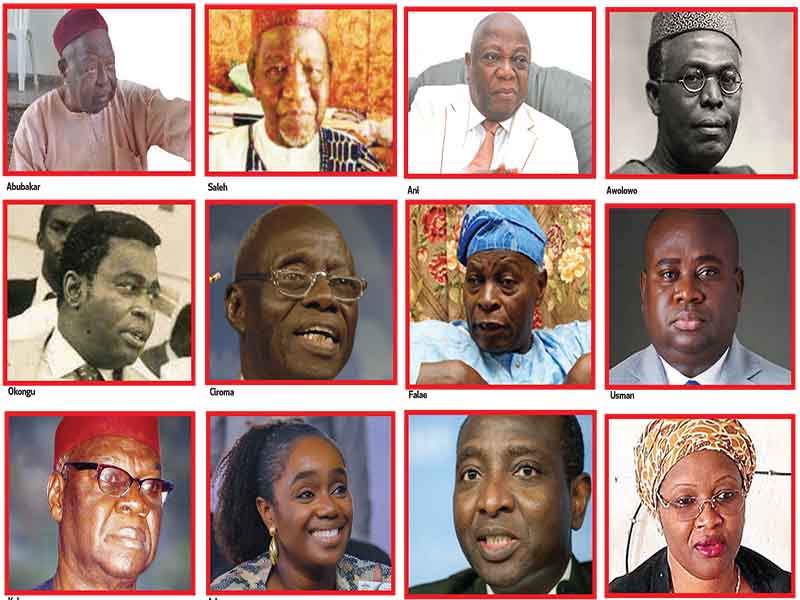 As Nigeria marks its 61st anniversary as an independent nation, Festus Akanbi identifies eminent Nigerians, who have manned the Finance Ministry, in this tribute

It’s Nigeria’s 61st Independence anniversary. Like other independent African countries, Nigeria has faced its fair share of challenges and complexities of managing its economy after the exit of the British colonial administration in 1960.

Has Nigeria been able to achieve the dreams of leaders of the various independence struggles? The answer is no, going by today’s economic realities.

However, despite the modest nature of the nation’s economic performance in the last 61 years, one cannot but recognise the sheer determination and patriotism of the eminent Nigerians who have called the shots as finance ministers in the post-independence era.

Chief Festus Okotie-Eboh became Nigeria’s first and the longest-serving Minister of Finance for a period of nine years (1957-1966) until he was murdered in the military coup of 1966 alongside other leaders like Prime Minister, Tafawa Balewa, Premier of the North, Sir Ahmadu Bello, Premier of the West, Chief Samuel Ladoke Akintola and some senior military leaders.

A flamboyant politician, he was instrumental in the founding of Nigeria’s Central Bank in 1959 and was also part of the team that brought Julius Berger to Nigeria in the quest to build the Eko Bridge.

Obafemi Awolowo was the first premier of the Western Region and later federal commissioner for finance, and vice chairman of the Federal Executive Council during the Nigerian Civil War.

His invitation to handle the nation’s economy during the Nigerian Civil war period was largely informed by his dexterity in handling the economy of the South-west region as a premier.

Through prudent management of cocoa revenues, he invested in human capital, in industry, agriculture, and rural development, and basic physical infrastructures. He created several institutions to drive the process of social and economic transformation of the region. Among them were: The Western Nigerian Development Corporation, WNDC; the Finance Corporation; and the Western Nigeria Housing Corporation.

Shehu Shagari, who became Nigeria’s civilian president in 1979, had between 1971 and 1975, served as the Federal Commissioner (a position now called minister) of finance. During his tenure as the commissioner of finance for Nigeria, Shagari was also a governor for the World Bank and a member of the International Monetary Fund (IMF) committee of Twenty. Shagari as the Federal Minister of Finance also launched the present Nigerian currency -the Naira. In 1976, Shagari initiated the Nigeria Trust Fund in African Development Bank with the sum of $100 million to assist poor African countries to finance some of their developmental projects.

Ekukinam, an economist and administrator, was director of research at CBN from 1966-1972, and later vice-chairman and chairman of the social-economic council to the governor of the South-eastern state. Ekukinam served as Minister of Finance between 1976 and 1977.

Dr. Onaolapo Soleye served for 20 months as minister of finance in the federal cabinet constituted by Maj-General Muhammadu Buhari in his stint as military head of state between January 1984 and August 1985. Soleye’s major policy actions during his tenure as Minister of Finance include: policies preventing drastic devaluation of the Naira; Refinancing of trade debt arrears insured by international organisations; Support for the rationalisation and restriction of imports and the creation of new Naira notes to halt currency smuggling.

He served as Finance Minister of Nigeria, Minister of National Planning, and Transportation Minister. He served twice as the minister of finance. He was a presidential aspirant in the 2003 Nigeria general elections, under the platform of The New Nigeria Peoples Party. He participated in research work on developing countries and lectured at the university level. While at the World Bank East Asia and Pacific Programmes Department, Kalu contributed significantly to micro-and macro- economic work on the economies of Japan, Korea, Taiwan, and Hong Kong.

Okongwu, a Nigerian economist, and a one-time, Governor of the Central Bank, was the Minister of National Planning (1985-1986) and then Minister of Finance (1986-1990) during the Babangida administration. He was appointed chairman of, African Development Bank in June 1989.

Olu Falae is a Nigerian banker, administrator, was secretary to the military government of Ibrahim Babangida from January 1986 to December 1990 and was briefly the Finance Minister in 1990.

In 1985, before his appointment, the military sought the public opinion of an IMF economic structuring proposal as a condition for external credit from the fund. The popular opinion was to reject the proposal. The administration then came up with Structural Adjustment Programme (SAP). During his time in office, Falae became a vocal defender of SAP even when it was becoming unpopular with the masses, earning him the moniker “Mr. SAP” amongst ordinary Nigerians.

In 1979, he was posted to the Finance Ministry as the Permanent Secretary. At the Finance Ministry, he was involved in managing Nigeria’s relationship with its external creditors and was on the Nigerian negotiating team for the Lome II agreement. Alhaji was later posted to the Ministry of Planning before Babangida upgraded his position as Minister of State, Budget and Planning in 1988. Between 1990 and 1993, he was the Minister of Finance. In the mid-1990s, he was the country’s High Commissioner to the United Kingdom.

He was reappointed and served as Minister of Finance for the second time between 1993 and 1994.

Ani was the Minister of State for Foreign Affairs and Finance Minister of Nigeria from 1994 -1998 during late General Sani Abacha’s regime. He was also a former Chairman of KPMG, former President of the Institute of Chartered Accountants of Nigeria (ICAN).

Usman was the Finance Minister of Nigeria from 1998-1999. He was suspended by Gen Sani Abacha as the deputy governor of the Central Bank of Nigeria but was appointed by Gen Abdulsalami Abubakar to oversee the Federal Ministry of Finance.

Ciroma, a former Governor of the Central Bank, served at various times as Minister for Industries, Agriculture and Finance during the Shehu Shagari administration and served as Minister of Finance in the government of Olusegun Obasanjo from 1999 to 2003.

He brought gusto and competence to his old job, but it was during his stint at the finance ministry that he suffered a dreadful road accident that nearly cut short his political career and spent months on end in a German hospital. Although he was brought back to his duty post, he later resigned.

During her first term as Finance Minister in the administration of President Olusegun Obasanjo, she spearheaded negotiations with the Paris Club that led to the wiping out of $30 billion of Nigeria’s debt, including the outright cancellation of $18 billion. In 2003, she led efforts to improve Nigeria’s macroeconomic management including the implementation of an oil-price-based fiscal rule. Revenues accruing above a reference benchmark oil price were saved in a special account, the “Excess Crude Account,” which helped to reduce macroeconomic volatility

A development economist, who rose to the position of a managing director of the World Bank, Okonjo-Iweala is unarguable, the most decorated Minister of Finance to date.

During his tenure as the Minister of Finance and National Planning, he was the Chairman of the Nigerian National Economic Management Team.

He represented Nigeria as a Governor on the Governing Boards of the World Bank and the International Monetary Fund. He was a member of the Federal Executive Council, National Economic Council, and the National Council on privatisation.

He was the first Nigerian minister to publicly declare his assets before assuming office as a public officer, an act considered as a sign of accountability and transparency.

He was appointed minister of finance in the cabinet of President Umaru Yar’Adua on 17 December 2008.

Muhtar has been executive director of the World Bank from 2011 to 2014. His appointment to this full-time position in Washington is a result of the creation of an additional seat for Africa on the board of the World Bank Group.

In 2014 he moved to Jeddah, Saudi Arabia, where he became vice president of country operations of the Islamic Development Bank.

Aganga, who held sway as the Minister of Industry, Trade, and Investment of Nigeria, was first nominated by General Obasanjo and appointed by President Jonathan as Minister of Finance from 6 April 2010 to June 2011. Aganga has been widely acclaimed as being responsible for many transformational milestones in Nigeria, including – establishing the country’s Sovereign Wealth Fund; issuing the nation’s first-ever Euro Bond; chairing the World Bank and IMF in 2010, chairing the 8th Ministerial Conference of the World Trade Organisation (MC8) in Geneva in 2011 (the first African to chair these organisations); making Nigeria the premier destination for investments in Africa, and launching the country’s boldest industrialization agenda.

On her second coming, Okonjo-Iweala was appointed the Minister of Finance in Nigeria and Coordinating Minister for the Economy (August 2011 to May 2015). Her legacy includes strengthening the country’s public financial systems and stimulating the housing sector with the establishment of the Mortgage Refinance Corporation (NMRC). She also empowered women and youth with the Growing Girls and Women in Nigeria Programme (GWIN); a gender-responsive budgeting system, and the highly acclaimed Youth Enterprise with Innovation Programme (YouWIN); to support entrepreneurs, that created thousands of jobs. As part of Goodluck Jonathan’s administration, she received death threats and endured the kidnapping of her mother. Today, she presides over the World Trade Organisation as a Director-General.

Adeosun is a former Finance Minister of Nigeria and former chairman of the Board of African Export-Import Bank (AfreximBank).

With a robust private practice experience, Adeosun was appointed Ogun State’s Commissioner of Finance in 2011. She maintained this role from 2011 to 2015 when she helped in turning around the economic fortunes of the state. As a result of her skills and talent in financial management, Kemi Adeosun, as a Minister of Finance was able to manage and sustain the financial sector of the entire country during the recession and regulated the oil industry. It’s due to her efforts that a large number of ghost workers were uncovered in the sphere of civil services.

How the Fed’s policy statement has changed this year

The Federal Reserve building is set against a blue sky in Washington, U.S., May 1, 2020. REUTERS/Kevin Lamarque/File Photo Sept

Should You Invest in Cryptocurrency in 2021?

Cryptocurrency is one of the most intriguing types of investments, and if you’re on the fence about whether or not

Buy These 2 Growth Stocks on the Dip

Investors have enjoyed nice gains over the past five years. Since September 2016, the S&P 500 index has risen 106%,