The Contrarian — who is the real Peter Thiel?

Get a shot of weekend inspiration with the best in life, arts and culture. Delivered every Saturday morning.

Whatever you think of him, Peter Thiel is easily one of the most interesting people to have emerged from Silicon Valley over the past two decades.

Libertarian kook, Bond supervillain, rightwing provocateur: these are all caricatures that critics have sought to attach to the tech investor who became Silicon Valley’s most prominent backer of Donald Trump. They are also labels that is easy to imagine Thiel himself relishing. As a rightwing student at Stanford University in the 1980s, he trolled the liberal elite of his day in a way that anticipated the “own the libs” rhetoric of the Trump era.

Yet alongside the courting of controversy has been a readiness to challenge received wisdom in the tech industry and public policy norms alike.

Thiel’s career has traced the highs and lows of the financial and tech worlds, bringing brief victory and defeat as a macro hedge fund manager during the financial crisis, as well as more enduring success as a venture capital investor. From chief executive of the payments platform PayPal to first outside investor and board member at Facebook and co-founder of controversial big data company Palantir, he has also had a front-row seat at some of the most important tech companies of the age.

So it is slightly disappointing to find that in Max Chafkin’s biography The Contrarian, Thiel has been reduced so completely to the role of unlikeable villain. A Bloomberg Businessweek reporter, Chafkin does a good job of chronicling Thiel’s years as intellectual wunderkind, tech investor, would-be hedge fund visionary and rightwing political influencer. Yet sadly, he defaults to a reading that at all times ascribes the worst of motives to its subject who, we are led to believe, set the tech industry on an amoral pursuit of wealth and power.

Thiel’s apparent contradictions are certainly plentiful. But then, who said people have to be consistent?

His libertarian leanings have involved backing movements such as seasteading, which holds that living on a platform moored at sea offers one of the only routes to true freedom from government. That and other seemingly barmy ideas such as his interest in medical inventions to defeat death made Thiel the inspiration for a memorably messianic but naive character, an investor called Peter Gregory, in the HBO comedy show Silicon Valley. The libertarianism stands in notable contrast to business interests that have relied on activist government, including Palantir’s profiting from government surveillance.

Many of the technological, political and public policy battles that Thiel has fought are still raging, and do not yield to easy answers

Thiel has also liked to cast himself, over the past decade, as one of the few people left in Silicon Valley who is interested in truly revolutionary ideas, rather than the unchallenging business notions of the current tech era, such as social media. According to Chafkin, he was banned from making further internal speeches to Facebook staff after offhandedly suggesting that the social network was an uninteresting idea compared with the things the tech world should be inventing. Yet by this account, he used his position as a Facebook board member to steer CEO Mark Zuckerberg into taking a lenient stance towards disinformation stemming from the right during the Trump presidency.

An acute contrarianism is certainly one strand that helps to explain some of the twists and turns that have defined Thiel’s career.

Chafkin opts for a simpler way to resolve the apparent contradictions. The public posturing, he concludes, amounts to intellectual camouflage for a fundamentally cynical worldview. At heart, according to this reading, Thiel’s politics consist of little more than a collection of reactionary biases. And his investment philosophies provide cover for an amoral willingness to exploit any situation to his own advantage.

The readiness to attribute selfish, cynical or callous motives to Thiel robs his character of its complexity. Yes, his actions often seem Machiavellian — not least his secret funding of an invasion of privacy lawsuit that bankrupted the blogging empire Gawker — and Chafkin does a good job of highlighting the things that have contributed to this sinister persona. But many people cheered the demise of Gawker, which was frequently the target of litigation, and it seems harsh to undercut so much of what Thiel has stood for.

Chafkin says he spoke to more than 150 people and most chose to remain anonymous out of fear, given Thiel’s “record for trying to hurt those who’ve attempted to uncover his secrets”. The result is an abundant use of unattributed quotes, which certainly help to spice up the story yet also generate a sense that scores are being settled behind the cloak of anonymity. This is one unnamed source summing up Thiel’s relationship with Tesla founder Elon Musk, which had been fraught since he was involved in a mutiny to force Musk out as CEO of PayPal: “Musk thinks Peter is a sociopath, and Peter thinks Musk is a fraud and a braggart.”

The Contrarian seeks to present Thiel’s personal story as a parable of Silicon Valley since the turn of the millennium. He stands accused, for instance, of using sharp tactics to fuel growth at PayPal, in the process seeding the sort of “unsustainable or ethically dubious tricks” that later led to bad behaviour at companies such as Uber. 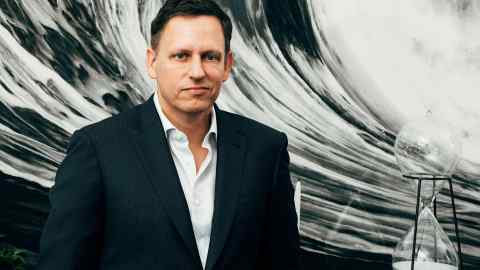 Many of the technological, political and public policy battles that Thiel has fought are still raging, and do not yield to easy answers. Silicon Valley these days often feels under the sway of a powerful group of monopolists, and the institutions needed to ensure continued US technological leadership — not least higher education, a target of Thiel’s ire — may not be up to the task. With the passing of the Trump presidency, he has retreated somewhat from the headlines. But it seems a safe bet that Thiel will remain one of the tech world’s most fascinating figures for years to come.

Richard Waters is the FT’s US west coast editor

VANCOUVER, BC / ACCESSWIRE / September 16, 2021 / CopperBank Resources Corp. (“CopperBank” or the “Company“) (CSE:CBK) announces that it

What to know this week

The spotlight this week for Wall Street will be on labor market data, as investors await the release of the